A crowd of about 60 people interrupted traffic Friday night in downtown to bring attention to the growing nationwide number of Black transgender women killed.

The march, which began in Grand Park and concluded at the U.S. Citizenship and Immigration Services federal building, was led by Chella Coleman, a transgender activist and other advocates seeking justice for the 21 deaths thus far of transgender and gender non-conforming people this year.

The number--considered to be a growing epidemic of transgender violence by advocates who track these fatalities--is comparably high with 27 documented deaths in 2017 and 19 reported deaths in 2016, according to the National Coalition of Anti-Violence Programs.

“I didn’t realize I was so much of a target,” said Chocolate, a Black transgender woman who partook in Friday night’s demonstration and expressed her anxiety regarding the recent and ongoing violence against transgender people and Black transgender women specifically. “I represent a small number of so many of us and it’s real out here. We’re here to have our voices heard.”

The Human Rights Campaign recorded that 13 of the 21 transgender people killed this year had been Black transgender women.

The report, titled “Violence Against the Transgender Community in 2018”, additionally notes that many transgender victims are misgendered in police and media reports which delay awareness of deadly incidents.

As the marchers moved through the streets of downtown, they shouted out the names of transgender women killed. These names were followed with echoes of, “Say her name”-- a phrase and hashtag on social media originally launched by the African American Policy Forum in 2015 to highlight police violence against Black women and girls.

“I’m here to support and understand as a Black, straight guy, which is rare,” said Sight Zilla, one of the demonstrators. “I have a lot of friends who are trans and I’ve been hearing about the murders of Black trans lives.”

The 26-year-old said that he’s been in numerous situations in which he’s witnessed transgender people being harassed in public. He described an instance in which he and his partner intervened to help a transgender person being verbally assaulted by a drunk person. He remembered the victim was grateful and had also said the constant harassment was nothing new.

“I was raised in a transphobic and homophobic environment,” said Christine, another participant who commuted from the San Gabriel Valley to attend the action and who described herself as a cisgender Black woman. “I found myself hating these people and not knowing why. I had to reprogram myself.”

She said reprogramming herself meant refusing to attend her family’s church and distancing herself from friends and relatives who engaged in negative remarks about LGBT and transgender communities. “I don’t want to leave this action,” she said.

Coleman, one of the action’s leaders, said the escalating violence against transgender people is personal to her as Black transgender woman. “I get depressed really fast when it comes to these things.”

The event, she said, was possible because of the support of her friends, many of who were participants and offered her resources and encouragement.

The march opened and closed with demonstrators locking hands in a circle and reciting a poem by author and former Black Panther Party member Assata Shakur.

“We’ve always been pushed under the carpet but for some reason we’re coming to the front and our voices are getting heard,” Chocolate said. 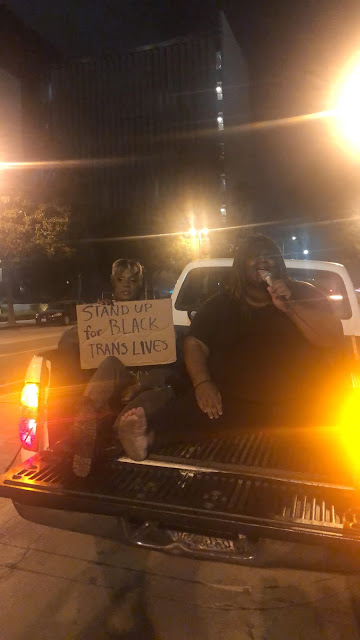